Credit Card users still unaware of what rate they pay 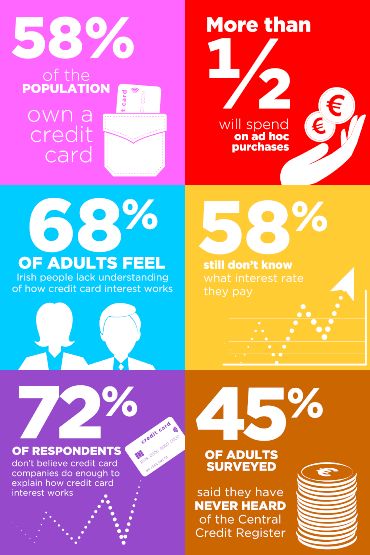 The national survey* issued by the Irish League of Credit Unions (ILCU), found that over half (58%) of Irish credit card holders don’t know what interest rate they are paying.

Since a similar survey was published last year, there has been no improvement in public awareness of interest rates or spending habits. Over half the Irish population own a credit card with the majority spending it on adhoc items. Despite this, many are still confused about the rate of interest they are paying.

Over two thirds (72%) of the population believe credit card companies in Ireland don’t do enough to explain how these rates work while 70% say Irish consumers are too reliant on this method of lending.

Almost six in ten credit card holders don’t know what interest rate they pay and almost 40% are unsure how that rate is applied. Of those that state they are familiar with their credit card interest rate:

In reality, credit card interest typically ranges from between 13% to 23% in the Irish market.**

Of those who claimed to know what rate they paid, there was confusion around how that rate was applied. 36% of credit card holders incorrectly state they “don’t pay any interest” if they cover the minimum balance due at the end of each month. The same amount, (36%) correctly state they pay interest on the full balance as well as interest on the outstanding balance from the date of the transaction.

Almost two thirds of the population (58%) own a credit card and more than half will use it to buy ad hoc items. 16% will spend it on a holiday while just 11% made a New Year resolution to throw the card away.

A significant 70% of credit card holders plan to use their monthly income to clear their balance fully every month. 63% of adults state that they have never missed a loan or credit card repayment giving them a perfect credit rating.

70% of adults agree that people in Ireland rely too much on credit cards for making purchases while 43% believe people are spending the same, or more on their credit cards.

45% of adults surveyed said they have never heard of the Central Credit Register*** – 6% more than last year. A further 24% having some awareness but not sure of its role.

39% won’t change their behaviour towards loan repayments after hearing about the CCR, basing their confidence on past ability to meet repayments. 20% will try to be more diligent in making repayments on time.

“Since issuing a similar survey last year, there has been a notable lack of improvement in consumer awareness around credit card interest and how that interest is applied. With a significant number of people in the country still using credit cards to fund ad hoc items, it is concerning that lack of knowledge on interest rates remains very much widespread.”

“Many people believe credit card companies aren’t doing enough to explain how interest rates work. There are other places that encourage consumers to use resources such as The Competition and Consumer Protection Commission website, which provides simple explanations on financial products. At the credit union, we like to provide an open environment that provides guidance and support to anybody with these types of queries.”
“On a positive note – there has been an increase in the number of people who are aware of the Central Credit Register and with a fifth saying they would try be better at making payments on time, so we hope to see more optimistic changes in 2020.”

* The national study was commissioned by the Irish League of Credit Unions (ILCU), and carried out by independent research company, iReach Insights, in December 2019. 1,000 adults responded to the online survey. The iReach Consumer Decisions Omnibus delivers a high level statistical accuracy. Delivering a sample size of over 1,000 interviews, this provides a confidence level of + or – 2.5% at a 95% confidence interval.
**Competition and Consumer Protection Commission
***The Central Credit Register (CCR) is the centralised system which collects and stores information on loans of €500 or more, including credit cards, overdrafts, personal loans, mortgages and more.